On Thursday there were nine, on Wednesday only two, on Friday four, but by the weekend there could be more than two dozen again. The talk is of military aircraft from China’s „People’s Liberation Army“ (PLA) invading the airspace of democratic Taiwan on a daily basis. What Putin’s tanks were that had taken up positions on the border with Ukraine since last December, Beijing’s fighter jets and bombers are, from southern Chinese military bases, flying daring manoeuvres daily, not only testing Taiwan’s air defense system, but wearing them down.

Occasionally, Chinese navy boats also get in the way of American or Japanese ships navigating international waters near China’s shores or insisting on passage through the South China Sea, an international body of water that Beijing considers its territory.

Provocations of this kind have long been commonplace in the waters from Japan’s southern tip to off Australia’s beaches. Only last week, the crew of a Chinese frigate almost brought down an Australian helicopter with a blinding attack from a laser weapon. Reason, the helicopter crew was probably on the trail of a Chinese spy submarine operating in Australian waters.

With all these dangerous incidents, military officials from Tokyo to Canberra, from Hanoi to Jakarta, are increasingly concerned about whether and when this will spark a military explosion on the edges of the Pacific. That Taiwan will be at the center of a confrontation between the newly emerging great power China and the old Pacific power, the USA, has long been beyond question.

Taipei is the Kiev of the East

Because for China’s CP, Taipei is the Kiev of the East. And so, when, on the day of the opening of the Winter Olympics in Beijing, the Chinese news agency Xinhua published a photo of Xi Jinping with Vladimir Putin in contented harmony, more than a few observers wondered whether a kind of 21st century Hitler-Stalin Pact had not been concluded between the two. Along the lines of, you back me up on the invasion of Ukraine, and I look the other way on the interrogation of Taiwan.

At first glance, the two conflict hotspots appear too similar. Putin as well as China’s head of state and party leader Xi deny their opponents statehood. Taiwan and Ukraine are „brother nations“ without their own culture, language and statehood anyway, which must be freed from „Western influences“ in Taiwan and „Nazi politicians“ in Kiev.

If this did not happen, the „sacred“ motherland would be visibly surrounded by hostile forces and in grave danger. The claims to power are the result of historical events that have long since ceased to have any counterpart in modern international law.

Taiwan, for example, had to be ceded by the ailing Qing dynasty to the rising Japan in 1895. Before that, Chinese warlords and pirates, indigenous Malay tribes and Western colonialists had dominated rather than actually ruled the subtropical Ilha Formosa. At the Cairo Conference, the Western allies agreed as early as 1943 that the island off the coast of China would belong to the Republic of China and Chiang Kai-shek after the collapse of the Japanese Empire.

But by the time the Chinese Civil War ended, even the Generalissimo was already a loser in history. More than two million of his officials, soldiers and supporters of the National Chinese ruling party Kuomintang (KMT) fled from Mao Zedong’s communists after 1945 to the islands of then just eight million inhabitants.

The Japanese had left behind a comparatively good infrastructure and so Chiang first made the subtropical island his retreat refuge, then, after the outbreak of the Korean War, an unsinkable aircraft carrier for Washington in the Pacific.

It was not until the end of the 1980s, under his son Chiang Ching-kuo, that democracy took hold in Taipei and the majority of the native Taiwanese were finally able to determine their own future. With success, today the island nation is one of the leading democracies in Asia.

Because of Beijing’s stoic One China policy, Taiwan is recognized by only a few states, but it is also a fact that a sovereign title of the People’s Republic of China, which was founded under Mao’s Communist Party in Beijing only in 1949, never extended to the island. China’s narrative of the „renegade province“ is therefore historical nonsense. But that is not the point either.

What Xi and Putin actually fear is a living democracy, which has been established in Taipei and in Kiev, and which Putin in Belarus, like Xi in Hong Kong, has had bloodily trotted out by their puppets on the ground.

But that is also where the similarities end. Taiwan and its 24 million inhabitants seem to have the better cards, at least for the time being.

It is true that in recent years Beijing’s military has stationed entire batteries of medium-range missiles in its southern provinces of Fujian and Zhejiang, some of which are nuclear-tipped and all of which are aimed at Taiwan. But there is currently no sign of a military build-up that would indicate an imminent occupation of the subtropical island. And an occupation of Taiwan, military experts agree, would require the largest maritime troop deployment in human history.

To cross the Taiwan Strait, China’s generals would need tens of thousands of ships, because one to two million soldiers would have to be ferried to Taiwan. Such a build-up of troops cannot be concealed, as Ukraine shows. At the latest six weeks before an attack, Taiwan’s secret services, fed by the CIA, would know quite well about war preparations on China’s coasts.

Then a terrible bloodbath would begin. For Taiwan’s generals, national defense begins on the mainland. Once an attack has begun, they would respond with a hail of missiles on Chinese cities. While the VBA is vastly superior in numbers, Taiwan’s army has state-of-the-art US weapon systems. Moreover, the island, about the size of Baden-Württemberg, is difficult terrain. The majority of the population lives mainly in the western part of the island. Behind it, a good 300 peaks of more than 3,000 meters pile up in dense jungle.

Only a dozen beaches are available to an enemy army nationwide for land attacks. According to a recent opinion poll, only 7.5 percent of Taiwan’s population could still see anything positive in the state merger with China. The rest would resist Beijing’s soldiers. For some years now, reservists have also been receiving training in civil resistance. From retired US experts.

Taiwan has a strong trump card

As a rule of thumb in Taiwan’s national defense, its own soldiers would have to withstand an onslaught of Beijing’s troops for 14 days, after which Japan and US ground troops stationed in Okinawa and Guam would come to the rescue. Both countries have made it clear in recent months that they would not abandon their small, democratic brother nation. „Yes, we are committed to that,“ US President Joe Biden said very clearly as recently as late October.

Taiwan is not a member of a military alliance such as NATO. But with the Taiwan Relation Act, passed in Congress in 1979 when Washington switched diplomatic relations from Taipei to Beijing, the island has a similarly powerful trump card. Washington has thus committed itself by virtue of an American law to defend Taiwan and the island of Penghu if Beijing pursues a violent action „to determine the future of Taiwan otherwise than by peaceful methods.“

That includes, by the way, boycotts and blockades, such as of ports, to shake up the island’s economy. But not Beijing’s attack on Jinmen and Matsu, two small islands off mainland China held by Taiwan’s army. Assistance from Australia is also certain, from India very likely. After Putin’s attack on Ukraine, Canada, the UK and the EU, South Korea anyway, could no longer stand idly by and watch Taiwan occupied.

The good news is, Xi Jinping can hardly afford that in 2022. Having already been Chinese president for life, he wants to have himself elevated to the same CP spheres as Mao Zedong at the upcoming 20th Party Congress in autumn and be crowned helmsman without term limits. This would not succeed if he had instigated the Third World War: and the chain reaction that an attack by Xi’s soldiers on Taipei would trigger would not be anything else.

Simulations by the Chinese army a good eight years ago had shown, according to exclusive information received by “The Rickshaw Reporter”, that a war between China and Taiwan would claim more than 1.3 million lives in just the first four weeks. Two-thirds of them in Taiwan, the rest among Chinese attackers.

At the time, this had deterred the army leadership from attacking Taiwan immediately. For Xi Jinping, however, this is no longer an obstacle. Only before the 20. Party Congress, which is to take place in autumn, he cannot risk it for fear of losing power.

The bad news, of course, is that Xi will try anyway. Unlike his predecessors, he has made it clear that China, and by that he means only himself, does not want to „postpone reunification“ with its brothers and sisters across the Taiwan Strait forever. According to his ideas, it should happen before the end of this decade. And like Putin, he threatens violence if his ideas are not met.

Xi also feels surrounded by the hostile West. And if he can’t buy off states as part of his „One Belt One Road“ initiative, the idea of the „New Silk Road“ along which the world must dance to Papa Xi’s tune, then he gets what he wants by military force.

Because Taiwan is the centerpiece of the so-called „First Island Chain„, which stretches like a barrier between the Chinese mainland and the Pacific. If Xi Jinping’s soldiers had occupied the island, he could exercise almost unlimited power in Asia, harass arch-enemy Japan, cut it off from raw material supplies, and the US‘ grip on the most populous continent would be broken.

And not only that. Xi would also have Europe firmly in his grip with an occupation of Taiwan. For the role that once fell to Ukraine as the world’s breadbasket, tiny Taiwan plays in the most important commodity of the 21st century. More than 60 percent of the world’s microprocessors, without which our mobile phones and computers, our cars and machine tools would no longer function, are made on Taiwan and by its producers.

If China’s ruler could henceforth determine their allocation and sale to the hated West alone, then what US Treasury Secretary Henry Morgenthau once planned with post-war Germany would be a trifle to the industrial punishment, we face from Xi Jinping and his comrade-in-arms Vladimir Putin in the event of a defeat for Taiwan.

This article first appeared in abridged form on: The Axis of Good, a political blog in Berlin and Der Rikscha-Reporter/ The Rickshaw Reporter in German. (Translated by: Deepl.com)

A brave man shouted "overthrow CCP, overthrow Xi Jinping" in front of a police. from China 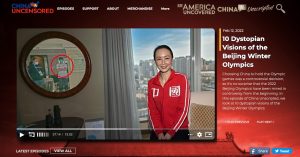 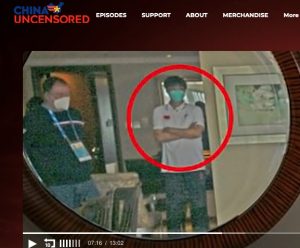